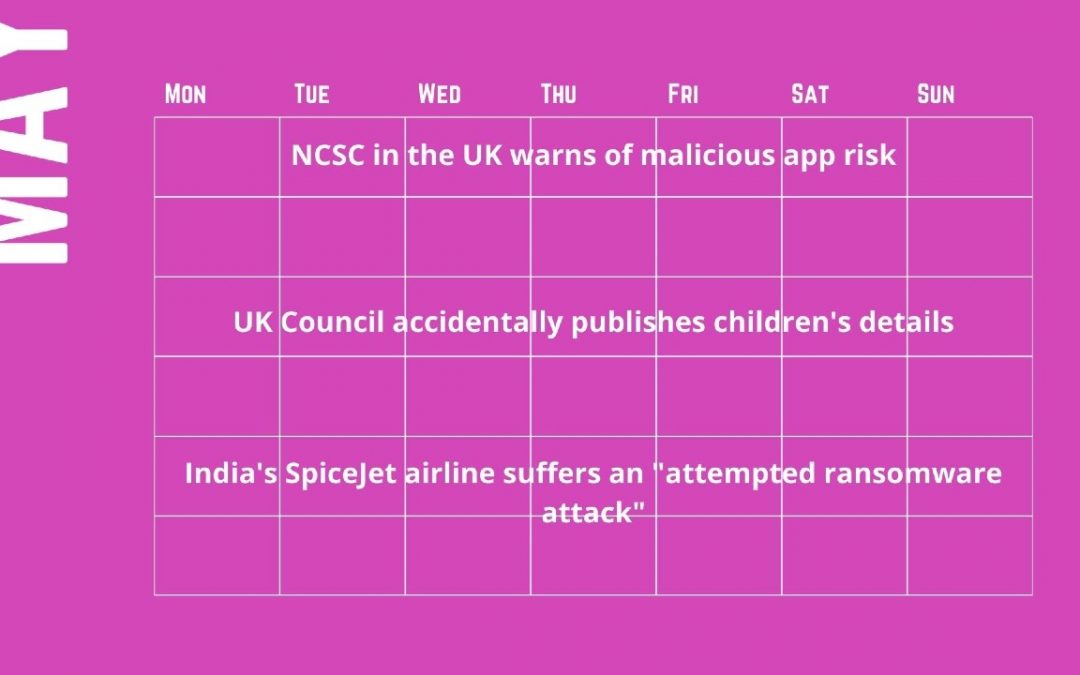 As we find ourselves at the end of the month, it is time for cyber security news May 2022. Here we look at an NCSC warning in the UK over cyber-criminals targeting apps to cause harm to connected devices. Then we focus on a data breach in Cornwall involving the personal details of five school children. Finally we end with a story on ransomware from the past week.

Read our IT security round-up for April 2022.

NCSC in the UK warns of malicious app risk

The UK’s National Cyber Security Centre has released a report on the threats malicious apps pose.

Many of us have apps downloaded on our smartphones and we regularly add to our collections. Nowadays, devices including smart TVs and smart speakers also have them. The government is therefore consulting on new guidelines on app / app store security and privacy.

The NCSC supports government proposals requesting app stores to commit to a new code of practice. This will effectively set out minimum security and privacy requirements, with developers and store operators also covered.

According to the government, “this includes Apple, Google, Amazon, Huawei, Microsoft and Samsung,”

The data breach included their names, addresses and dates of birth. The council issued an apology, citing “human error” as being the reason for the breach.

The error occurred when online documents for a meeting were published and the paperwork also included details for the children’s parents.

The airline’s systems faced an “attempted ransomware attack” which then led to delayed flights.

Many people were also left stranded at airports in an incident which garnered much social media coverage. SpiceJet Tweeted that “our IT team has contained and rectified the situation and flights are operating normally now.” In response, a number of passengers also took to Twitter to complain about their experience.

That is all for your cyber security news May 2022. What do you think of our latest selection? Were there other stories that caught your attention? Perhaps you were affected in some way by events that transpired in May? Whatever the case may be, we would love to hear from you!